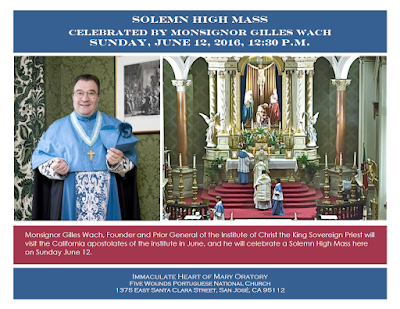 Click photo for larger size flyer to get complete information
Posted by Monterey Latin Mass at 4:09 AM 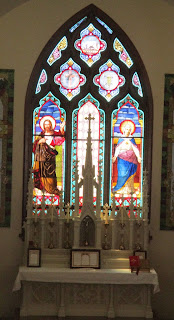 On May 22nd., 2016, the Monterey Bay Area Latin Mass Community officially became part St. Benedict’s / Sacred Heart Parish in Hollister, California. A Sung High Mass was followed by a taco feed reception in the courtyard of the Church. The day before, the first Traditional Latin Mass at Sacred Heart Church in two generations was celebrated by our Chaplain Fr. Nicholas Milich after the blessing of the new High Altar. Many blessings and thanks to all who worked so hard to make this move happen~

Posted by Monterey Latin Mass at 2:54 AM

6th. Annual Pilgrimage to Our Lady of Bethlehem 2016 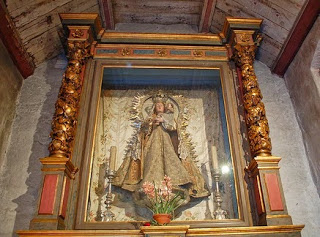 The weekend of May 20th.-22nd. will be the 6th. annual pilgrimage in honor of Our Lady of Bethlehem, whose statue was the first to arrive in California with St. Junipero Serra, and is now at Mission Carmel.  The initial purpose of the Pilgrimage was to have Our Lady returned to the High Altar where she was originally, and the novena prayed asked for the elevation of St. Serra to the altar (which did happen this last October.)
On May 20th. the Pilgrimage will start with the Traditional Latin Mass around 7:45 am at Mission San Juan Bautista, and on May 22nd. the ending will be a High Mass at 3:00 pm at Mission Carmel. All are invited and welcome to attend one or both Masses.
For the history of Our Lady of Bethlehem’s statue please visit www.traditioninaction.org/History/B_020_Belen_1.html
Posted by Monterey Latin Mass at 12:54 AM 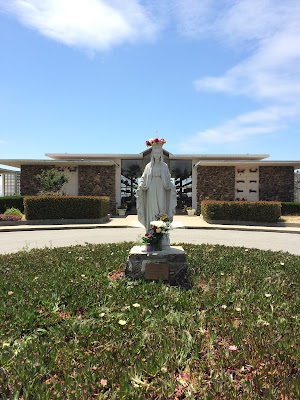 Today was our last Mass at Queen of Heaven Cemetery Chapel. A huge thank you to the Queen of Heaven Cemetery management and staff for their charity and hospitality these past four years. We will be joining Sacred Heart Parish in Hollister as of our first Mass on May 22nd. After Mass all are welcome and encouraged to attend our taco feed reception, to meet and greet our new Parish staff and fellow Sacred Heart parishioners.

Thank you to California Catholic Daily for posting a story about our move on their website, click here to view it.
Posted by Monterey Latin Mass at 4:00 PM

Novena to the Sacred Heart of Jesus 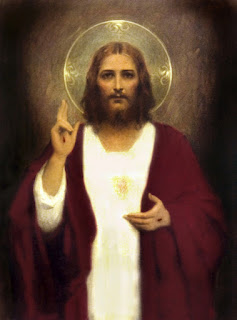 Lord Jesus, Who has deigned to open by Your special love the unutterable goodness and riches of Your Heart to Your Bride, the Church: grant to us, Your servants, that we may merit to be enriched and refreshed by Your heavenly graces, flowing from this sweetest of fountains. Amen.
Our Father… Hail Mary… Glory Be…
Posted by Monterey Latin Mass at 12:43 AM 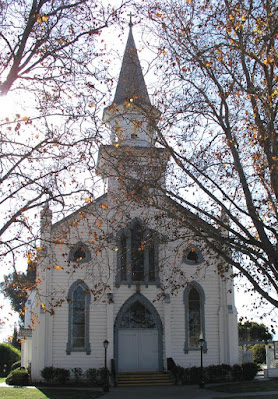 Starting Trinity Sunday, May 22, the old Sacred Heart Church in Hollister will become the new site for the Traditional Latin Mass in the Monterey Bay Area.
A Misa Cantata--also known as a sung High Mass--will be offered on Sundays at 10:30 a.m. in the historic church located at 680 College Street in Hollister (95023).
A reception will follow in the courtyard outside the church.
Although much work remains to be done, the Latin Mass community is restoring the sanctuary of the old church, following as much as possible the original design. The restoration work and other improvements will continue in the months to come.
The Latin Mass community, which has been active in the Monterey Diocese for eight years, most recently at the chapel of a Catholic cemetery near Salinas, will now become part of the Hollister parish. It has been the only public Mass regularly offered in the ancient rite in the Monterey Bay Area.  The Traditional Latin or Tridentine Mass is the classic rite of the Roman Catholic Church and was the norm until it was replaced in most churches in the late 1960s by a new form of Mass celebrated in modern languages.  Monterey Bishop Richard Garcia has supported the restoration of the Mass and of Sacred Heart Church, as has Fr. Claudio Cabrera, the new pastor of the Hollister parish.

http://rorate-caeli.blogspot.com/2016/05/new-home-for-tlm-in-california.html
Posted by Monterey Latin Mass at 3:14 AM

May Crowning of Our Blessed Mother 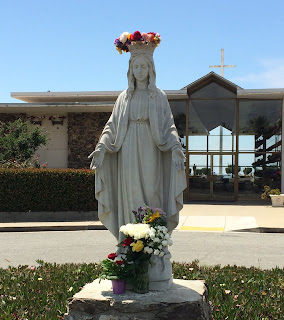 Thank you to all that helped organize and participate at the May crowning of Our Blessed Mother this past Sunday at our Mass site, Queen of Heaven Cemetery Chapel.

www.facebook.com/MontereyLatinMass/
Posted by Monterey Latin Mass at 8:07 AM 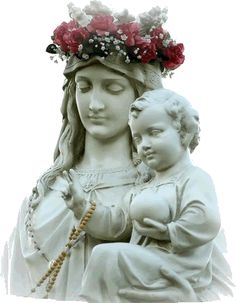 The Legion of Mary is sponsoring a May Crowning on Sunday, May 8th. immediately following Mass. One of the little girls from the parish will crown the Queen of Heaven statue outside the chapel while we sing Marian hymns. Please bring flowers to lay at Our Lady's feet to begin the month in which we honor Our Blessed Mother.
www.facebook.com/MontereyLatinMass
Posted by Monterey Latin Mass at 1:47 AM